WEA Respects Pope Benedict’s Decision to Resign, Interprets It as Choice of Courage
New York, NY – February 11, 2013
The World Evangelical Alliance (WEA) respects the recent decision of Pope Benedict to resign from his leadership role. This is seen by the WEA’s leadership as a choice of courage, noting as he did the announcement that he was doing what he felt best for the Roman Catholic Church.
The Secretary General of the WEA, Dr. Geoff Tunnicliffe noted, “I have found the Pontiff to be warm and authentic in our conversations and meetings. In addition, I appreciate his courage of ideas, even when they did not resonate with contemporary attitudes. I was especially moved by his boldness in warning us of the dangers of moral relativism and the tyranny of self-centered ideologies.”
The Pontiff, notes the WEA, valued dialogue and relationships with other Christians and peoples of other religions. His interactions with others were always based on the assumption that we would honestly search for truth, our conversation would be rooted in our personal convictions and in all matters we expected each other to be loyal to one’s own faith.
Never did he give any hint of allowing any of us to water-down one’s faith. Inter-church relations, for him, were not to be compromised to achieve harmony, but were, rather, to be an authentic search for truth. Even when discussing theological differences, he seemed to listen very carefully and understand, why this is so.
A historic document developed during Pope Benedict’s tenure was Christian Witness in a Multi-Religious World. This shared statement was signed and released by the three primary world Christian communities: the Roman Catholic Church, the World Council of Churches and the World Evangelical Alliance.
In addition, an important bi-lateral theological dialogue of the WEA and the Pontifical Council for Promoting Christian Unity will release its results in 2014.
The Evangelical community has been particularly interested and appreciative of his writings; material that reveals a person of deep theological reflection. His revisiting of the story, message and work of Jesus Christ, as Son of God, Savior of the world, has provided focus on Jesus as central in the life of the Church and in his own personal ministry.
Dr. Tunnicliffe has met with Pope Benedict on several occasions. The latest meeting took place at the Vatican in September 2012, when Pope Benedict invited Dr. Tunnicliffe to address the Synod of Bishops for the New Evangelization.
The World Evangelical Alliance wishes God’s blessing upon Pope Benedict in his retirement and prays for wisdom as the leaders of the Catholic Church select their next Pontiff. 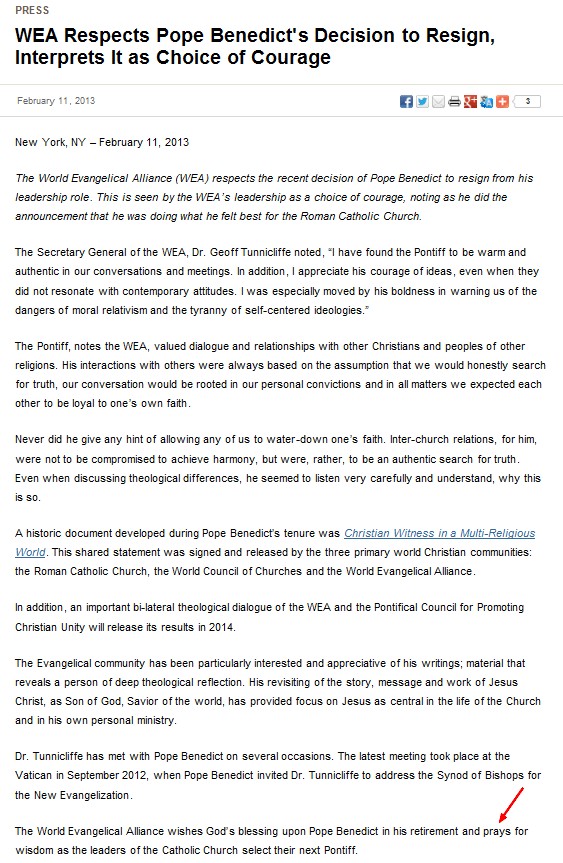